The modern 7/60th Regiment reenactment group depicts the uniform and equipment of the battalion as it appeared in late 1814.  Its portrayal is based upon several key contemporary sources, including artifacts, inspection returns, the military artworks of Charles Hamilton Smith, and the tailoring notebook of the firm J.N. & B. Pearse & Co., the clothier that supplied uniforms to the 60th Regiment during the Napoleonic Wars. 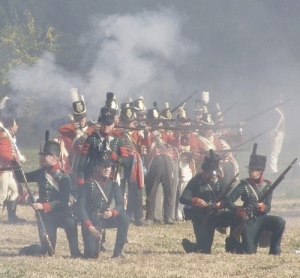 From its formation in August 1813 the 7/60th Regiment was “clothed as the 5th battalion” in a green rifle uniform.  The Pearse notebook (c.1810-1815) indicates the coats of the 5/60th (and thus the 7/60th) were made of rifle green cloth with madder red facings, and decorated with 44 regimental buttons.  In addition, Charles Hamilton Smith’s artworks suggest the epaulettes bore short red woolen tufts, while a thin red piping was applied to the bottom front edge of the coat.  The buttons were pewter, domed, and bore the regiment’s badge consisting of a crowned garter strap with the numeral ‘60’ in the centre.  Whereas the 5/60th clung determinately to its distinctive blue trousers, the 7/60th received green trousers previously authorised in July 1812.  Accordingly, the 7/60th was reported to be “clothed in green” when inspected in Halifax in June 1814.  The ‘stovepipe’ shako bore a brass bugle horn, a green woolen tuft and cords, indicating the battalion’s status as light infantrymen, and further adding to its ‘foreign’ appearance.

The eight centre companies of the 7/60th were armed with the New Land Pattern Light Infantry musket, which possessed both sights and a scrolled pistol grip to facilitate marksmanship.  Although widely issued to specialist Light Infantry units in Europe towards the end of the Napoleonic Wars, the 7/60th were one of the few regular British Army regiments to utilise the weapon in Canada during the War of 1812.  Several examples marked to the battalion survive in museum and private collections.  For close combat, the musket mounted  a standard Land Pattern socket bayonet with a triangular blade.

The 7/60th’s two flank companies were equipped as sharpshooters, and carried the famed Infantry Rifle (otherwise known as the ‘Baker’ rifle) with its brass-hilted sword bayonet.  One complete shipment of 200 stand of rifles was issued to the battalion in Guernsey in September 1813.  These were subsequently used by the flank companies during the Maine Campaign in 1814. 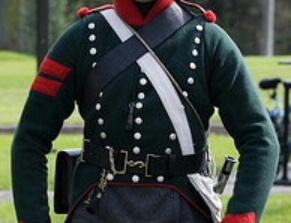 The entire battalion utilised the same black belting as British rifle regiments.  All companies carried their bayonets in fixed frogs sewn to the waistbelt, which fastened with the traditional brass ‘snake’ clasp.  Centre companies carried the 1804 Pattern 60-round cartridge box slung from the left shoulder.  Rifle companies used smaller boxes, and may also have received powder flasks and ball bags for loose shot, implements required for precision shooting with the Infantry Rifle.

Camp equipage was issued by the Commissariat Department when necessary, and returned to storage after use.  This included linen haversacks for carrying rations, and either wooden ‘barrel’ canteens, or often the older tin variety in North America.