How many battalions did the 60th Regiment have?

If the 7/60th was a British regiment, why was it called the ‘Royal Americans’?

The British Government raised the 60th Regiment in 1756 to assist in the defence of the American Colonies from attack by France during the Seven Years’ War.  Due to this geographic connection the regiment received the title of ‘Royal American’. Despite the loss of the 13 Colonies in 1783 following the American War of Independence, the obsolete title was retained until the end of the Napoleonic Wars in 1815.

If the 7/60th was a British regiment, why did it wear green uniforms?

Towards the end of the Napoleonic Wars green – rather than the traditional red coat – was increasingly favoured within the British Army for specialist Light Infantry units, being considered less visible and conspicuous for troops employed as skirmishers.  Consequently in 1813, upon the expansion of the 60th Regiment to include several new light battalions, authorities opted to clothe them in green.  When converted entirely into a Light Infantry regiment in August 1815, the entire 60th Regiment adopted green uniforms.

The soldiers of the 7/60th were recruited from prisoners of war captured by British forces during the Napoleonic Wars.  Most were Germans who were forced to fight on the side of France after Napoleon’s Grande Armée conquered Europe, although small numbers of Dutch, Swiss, Hungarian and even French prisoners were also recruited.  When the 7th Battalion was disbanded in 1817, most of the non-German personnel were discharged and returned to Europe, whereas the Germans were retained and transferred to other battalions of the 60th Regiment.

Do I have to speak German to join?

No.  While German was the lingua franca of the historical 7/60th, members of the modern reenactment group speak English.  Commands in German are only utilized for interpretive and presentation purposes where communication and safety issues are not otherwise a concern.

Are women permitted to portray soldiers?

Yes.  The 7/60th accepts female members who wish to participate as soldiers – it is expected they wear the uniform in the correct manner and conceal their gender to the best of their abilities during ‘public’ hours at events.

How much does the uniform cost?

Military reenacting is not an inexpensive hobby, particularly if pursued with proper attention to detail and authenticity.  However, while the initial start-up costs can be high, the subsequent costs of maintenance, as well as annual participation are relatively minimal once the uniform is acquired.

The full regimental uniform (including musket) for the 7/60th Reenactment Group costs approximately $1,800.00 CDN.  Recruits and new members may wear a simplified uniform during their first season to reduce initial costs.  A full list of required clothing and equipment is available.

Can I join with my family?

Yes – the 7/60th is family friendly.   Members accommodating families are expected to use proper military tents and appropriate types / quantities of camp equipment in order not to detract from the group’s historical interpretation.

Do I need a firearms licence to buy a flintlock musket?

No.  Flintlock muskets are legally de-regulated in Canada under the articles of the Federal Firearms Act, and do not require a licence for their purchase, storage, transportation or use.  Members of the 7/60th are nevertheless required to follow proper procedures for the safe handling, maintenance and storage of historic firearms at all times.

Do I require insurance to participate in re-enactment events?

Yes.  Most sites and events either strongly recommend or require third-party insurance to be held by participants.  Coverage is available on an individual basis through the group’s designated insurance provider, at a rate of approximately $30.00 CDN per reenactment season.

I have an ancestor who served in the 60th Regiment.  Can you tell me about him?

The 7/60th Reenactment Association possesses a small collection of regimental records for the historical 7th Battalion, 60th Regiment, and welcomes enquiries from descendants of soldiers and those wishing to exchange information.  However, the group is unfortunately not able to conduct extensive genealogical research.

Further information concerning personnel of the 60th Regiment may be obtained from the following sources: 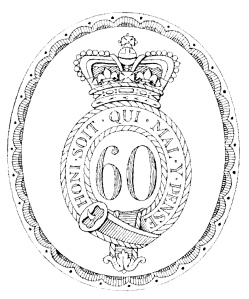